Every year around this time, you will probably see the name “Breakspoll” floating around different blogs. But what is it, and why is it important?

We sat down with one of the organizers of the event Jimmy Brayks to discuss why they do the award show as well as other fun facts from the brand that is now celebrating its 14th year in the game of recognizing talented breaks DJs and producers.

Don’t forget to head on over to Breakspoll to vote and recognize some of the top artists of the previous year!

To begin, and for those who may not know or have been living under a rock for many years, what is Breakspoll? How long has it been active, etc.?

Breakspoll is the International Breakbeat Awards – an annual awards show that celebrates the best of the breaks scene. The awards is basically a voting contest – where the public can vote for their favourites – be it DJ, producer, club night, track, remix, album, etc. Votes are then collated, nominations are announced, and then the winners are presented live at a big party, alongside a whole load of DJs and artists performing!

We’re now in the 14th year of the awards which is a fabulous achievement in itself!

What is the ultimate goal with the annual event?

There are three main goals with Breakspoll – one is to showcase talent, the second is to showcase the breaks scene in the media, and the third is to recognise the talent in the scene. Through things like shortlists, nominations, and even the awards party itself, we give artists lots of opportunities to get exposure, to get new gigs and production work, to get recognised by their talent, and for the industry to sit up and recognise where quality is. When you have 10,000 people vote for you in an award, it means you have a fan base!

Being an organizer for this type of event, what are some challenges that you face?

I’ve been a promoter for nearly 20 years, ran hundreds of events from 100 people to 10,000 people, run my own venues, and still, organising the Breakspoll event is still one of the hardest things I’ve done. Not only do the awards receive such criticism and comment (people still don’t understand the concept of a public vote!), the lineup for the event is critical to represent all corners of the scene, and organising 30+ artists to all be happy with their set times, travel arrangements and equipment is certainly a challenge. Breakspoll is essentially a festival in a club for less than the price of a regular club night.

With the rise of electronic dance music, how do you think the genre of breaks has done? Do you believe it’s been over shadowed?

It definitely has been over shadowed a little bit, but a lot of this comes from a lack of identity. Most people can name a house DJ, a techno DJ or a drum and bass DJ, but when it comes to breaks, most people can’t name one. I guess we have Fatboy Slim, Prodigy, Dub Pistols and Chemical Brothers in our corner, but they are so massive now its a big jump down to the next rung of superstars, and a lot of them don’t want to be “pigeon-holed” as breaks, even though it would probably do their career a whole lotta good! Breaks is still massive, its just got a PR problem!

Where do you see the genre of Breaks going in 2015 and beyond?

Breaks is always evolving and the last few years have seen some great changes. We’ve seen the ghetto funk / nu funk sound really coming strong – artists like JFB, A-Skillz, Stickybuds to name just a few seem to be at every festival without fail. The US seem to be making some awesome breaks too – Wes Smith is seriously rocking it at the moment, probably my favourite DJ and producer right now. Spain is really churning out some amazing beats, they are finally finding their groove and seem to be creating their own vibe which is awesome, as the parties out there are immense. 2014 has been without a doubt the year of the Punks – the record label from the Stanton Warriors. Ever evolving the line of broken beat, the label and the artists on it are outstanding, and I expect them to dominate the Awards when they are announced in March, and continue this in to 2015.

Many artists and record labels reading this interview will probably wonder, what does it take to be nominated and then honored at the annual Breakspoll?

Fans. Simple as that. Build a fan base, make stuff they like, communicate with them, get them to respect you, and ask for them to vote for you. Commenters always say mailing lists win Breakspoll awards. But they definitely don’t – no email I get means that I automatically vote for you. But send that email to someone that respects you, and appreciates you, and yes, they may well end up voting for you too. Too many people think that the technical aspects of music should win them an award, but votes don’t come from music teachers, they come from fans who want to dance their ass off!! Its simple marketing. I’d recommend anyone who wants to win an award read up on marketing, books by Seth Godin ideally!

If you had to name any of your favorite artists and labels from the past year who would those be?

Marten Horger released a tune in the last week of 2014 on Punks – “Baduka” – its a smash. I love it, I’ve been playing it non stop. Punks has been very consistent with their releases so they are up there as my favourite. It was also awesome to see the Plumps come back to making breaks – U Belong 2 Us is a bit cheesy to start with but sounds epic in a club, like all their stuff! DJ wise, I’ve been consistently impressed with sets by A-Skillz and JFB – both are the only DJs to get me dancing! Up and coming artists I’m watching include Kwerk, Chevy One and Father Funk.

What advice would you give to any new and aspiring Breaks producer?

Apart from the obvious “make good music” bit, I’d say one of the most important things is to make your tracks SOUND as good as possible – get a good mixdown by someone who knows what they are doing. If you are serious, its money well spent. To build a career, its all marketing. Start a mailing list from day one. Brand yourself properly – pay someone on Fiverr or similar to make you a decent logo, put it on everything. Channel your fans in to one place. Communicate with them. Give them things for free not available to anyone else. And just keep plug plug plugging away at it. For the business side, make sure you never sign away a track on the cheap without having clauses in it in case it blows up, register with PRS and places like that, and make sure you use a distribution company that gets your music in to the right channels as easily and quickly as possible.

Any special memories from past events that come to mind?

Breakspoll is ridiculously stressful, so I think I’ve blanked most of the events out of my memory! But our last party in Cable in 2013 was amazing, we sold the place out, 1600 people loving the breaks, 3 rooms of music, it was a fantastic event, a very proud moment, when a lot of people had written the event off. I celebrated hard that night, I left the club at about 11am (!) covered in industrial road paint (!) clutching a 3/4 empty bottle of Patron Coffee Tequila, fell out my cab home (!) and woke up on Monday to one of the biggest hangovers I’ve ever had. The other great moment was booking Kool Keith (Ultramagnetic MCs) to play at the Breakspoll After Party a few years back, that was an amazing moment for me as I am a massive hip hop fan, and this like me meeting my Jesus. But it turned out to be a big promoting mistake, as no-one in London had a clue who he was!

The Breakspoll – International Breakbeat Awards is held on Saturday March 7 at Sound Control in Manchester. Find out more information here. 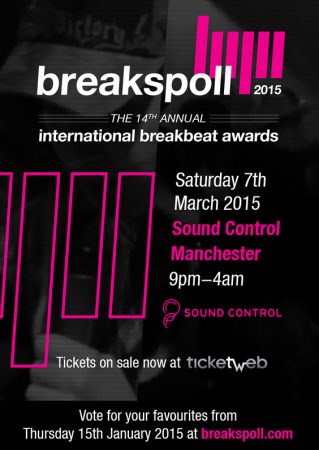