This year, Symphonic Distribution is proud to sponsor the annual Breakspoll International Breakbeat Awards. After our interview with Jimmy Brayks (one of the founders of the event), we thought we’d go a step further and talk directly with some of the talented DJs and producers who are not only nominated but also showcasing their talent at the award show through their usual event of Breakbeat goodness.

We start our interview series with Wes Smith who has been making noise over the past couple of years to discuss a little bit of the history of Breaks, what he has upcoming, and what it means for him to be featured as a nominee on Breakspoll.

Wes also has a brand new album out (available here). Check it out and enjoy this awesome read by this rising legendary Breaks producer!

Being in the industry a long time now and seeing the various ups and downs, where do you see things going for EDM and, in particular, Breaks?

I started Juice when I lived in Washington DC. DC has always had a strong “EDM” and rave culture, dominated by four-on-the-floor. I haven’t lived anywhere, including New York City, and three places in California, that Breaks, like the Beatport genre, was ever king. Based on that definition, it’s always been in the side room or a specialty show.

I’m no economist, but within Breaks, it appears there’s no middle class or circuit for artists to go from learning, to playing out, to making a decent wage and being able to continue getting better. Jimmy Brayks of Breakspoll said, “Breaks has a marketing problem,” and I would like to add, an education problem which go hand in hand. This is slowly changing and if there’s any contribution I’d like to look back on one day, it would be helping to establish a circuit that can live on long after I’m gone.

As for EDM, I recently met Tommie Sunshine and saw him moderate a panel with Carl Cox and others discussing “EDM.” He asked Carl what EDM meant. Cox returns a confused look and said something like, “It was Disco, then House, Electronica, Club, Ibiza, EDM you tell me what’s next…Im a DJ, I make people dance”.

I agree with this broad definition of EDM, and from there everything can be distinguished by four on the floor or a broken beat, at various tempos, that’s really it. Then there’s the culture of marketing EDM, I’m not going down that rabbit hole. But regardless, fans don’t follow genres anymore, if they ever did. They follow artists, promoters, labels, etc…and it’s so much easier to do that with today’s technology that genres have faded outside of music downloads, which is also fading. Fans listen to their favorite artist, or label, or brand, and then music “like” that. Technology let’s this happen like never before.

I think this is worth noting because I heard Skrillex play a solid hour of nothing but syncopated beats, it was a great set for 10,000 people. People don’t associate him with Breaks, but he sure played a bunch. I just heard an interview with Etc! Etc! on the Big Bass Party radio show out of Australia. I can tell you he’s not selling music classified as Breaks, but he’s playing at Breaksfest. Same goes for headliners at Americas biggest breaks party, Future Sound of Breaks. You’ll hear every syncopated subgenre including Breaks, dub step, trap, glitch hop, twerk, juke, even an entire room of drum and bass.

So I think broken beat is doing great, but EDM is on such a big wave, the traditional definition associated with movements from 10 years or more ago has moved on, just like disco etc…

Since Juice goes back to the days of physical, what about those times do you miss?

Oh the memories…I like nostalgia but I like moving forward more. I’m an absolute technology freak. I buy and sell all kinds of gear I’ll never use in practice. I just like buttons and the explosion of hardware meets software is insane. It also makes for fun conversation when it’s time to nerd out poolside with my crew.

Back to you query, it was a different experience for sure, planning for a set, having a posse to carry record boxes, etc…that all made for a different awareness that you were going out to play a party. Traveling with a record box was a bit like sporting new kicks, that piece of the DJ identity is gone. Learning to mix was also a different experience. I’m not a purist on the topic, but there was no option other than hours and hours and train wreck after train wreck in the bedroom to learn mixing and music selection.

I’m glad I cut my teeth this way, it was a hella good time. Along with my sound engineering experience, I think it gives me a confidence and self reliance behind the console that you don’t get by restricting your experience to some of the current options. I also like practicing basic turntablism. It’s an almost useless skill at a gig unless you are good enough to dictate the club equipment, even then good luck getting 1200’s and a battle mixer. Alas, like several past girlfriends, I don’t miss the wax.

For the purists, no vinyl was hurt in this interview. 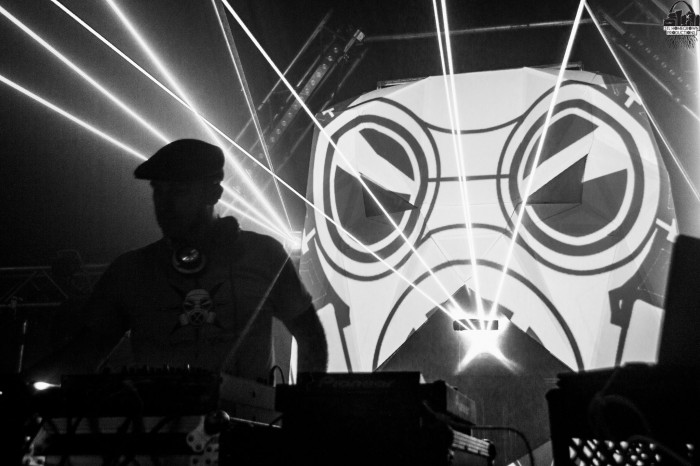 Are there other genres of music you’d like to produce?

I was brought up on Hip Hop, Reggae and Kenny Rogers. As a teen/young adult I had a punk rock phase and emo/indie phase. That leaves a lot of room for interest.

The broken beat swing suits my personality and I lean toward the 130BPM range although I’ve been known to stray. IMO broken beats have few boundaries beyond the 4/4 signature. I really enjoy listening to an element and thinking ok, that sounds good at [insert tempo]. Then that’s what I make. If you listen to my mixes for The Crystal Method, one is a drastic reduction from the original tempo, the other two are close to the original. It’s just something different for each person I guess.

If EDM was classified by BPM this would lead to a very different kind of exploration for fans and DJ’s. People could explore without the current genre system, and wow, the dance floor would be a different place. I’ve yet to see a store that promotes music in this manner, aside from simply providing the meta data, maybe its just a DJ or tech nerd thing.

Oh, yeah, your original question. I’m a DJ first and my interest has been broken beats in the 130 BPM range for a long time. I suppose it will stay that way as long as their is room for creativity and fans that will listen. Ironically, aside from my “Bring Back That Funk” certified smasher, my most popular tracks have been glitch hop, by a factor of ten. Check em out yo!

What has been some of your favorite regions to play at?
Black Rock City and India, without a doubt. Are those regions?

India is the first place I played internationally. I’ve traveled every state. Until recent years there wasn’t really a widespread culture of western music. Goa doesn’t count here BTW, as that region was settled by Portuguese, and while an awesome place to party, it’s pretty much western and unlike any other place in India. For the rest of India, the time signatures, sounds, ideology, really everything is based on a different purpose than western culture.

Playing to a crowd with vastly different musical, religious, and cultural roots than yourself is exciting. You just play from soul and the swing, and I think on that level connect, and it’s cool.

As for BRC, well 2014 was my first year, and that is the most interesting collection of people I have ever played to in the western hemisphere. Geographically it’s a region, but culturally, it’s pretty wild. This year I am going back to play sets on a 30 foot tall unicorn and a 40 foot long Rhino decked out with 20,000+ watt sound systems in the desert. Tell me where else you can do that?

From a domestic standpoint, what artists are out there that are making noise?

Talking EDM/Breaks, Blacklist has some great jams. I also like some of LO IQ’s work. Tony Quattro and Wuki have some fun music to play and Fort Knox Five, while they are veterans over here, they’ve mastered the funk revival. Omega Squad, some of my label mates are great DJ’s and getting sharp behind the DAW as well.

Generally, I’d like to see more working DJ’s get involved in producing vs. the other way around. I got into all this from going out, looking to have fun and dancing. When you come from this background, vs. the let’s cash in on Stock Ticker EDM angle, it’s a different perspective. My soul comes from a collection of different phases of immersion in styles. I think DJ’s have a lot of this, because they are very tuned in to using other people’s music to express this feeling. There is no question for me my variety comes from this exposure as a fan of music and DJ.

Being nominated for Breakspoll is a great honor. What do you think has gotten the attention of that market?

It’s crazy! I’ve watched this from afar year after year after year, like I used to read surfing magazines and wish I could go to the beach or have a reason to own board shorts. I got that covered by moving to California. To be nominated, to be playing, it’s wild man. Could be the music, the artwork, the stickers. Some say it’s cause I’m a nice guy. I really don’t know. I’m just happy to be here.

If you had to give any advice to any new artist or label owner, what would it be?

More practically, find great people to work with, and put all your energy into genuine relationships. Find your vibe, what’s deep for you, and pay excruciating attention to the details of expressing that to people who like what you do. If this is genuine it’s a true win win.

Read books by Steve Jobs, Larry Ellison, Yvonne Chouinard, and Seth Goden. A few chapters of the Bhagavad Gita never hurt anyone either. Lastly, accentuate the positive. Anyone that can afford the time and money to go to a club, much less DJ, is so incredibly lucky. Embrace whatever ride you are on, or change the ride if you aren’t happy.

What is upcoming for the remainder of 2015 for Wes Smith?

WOW…My new album “It’s Wes Smith Yo” drops in March. Ride the #MagicFugu baby. Touring starts right after that and is currently stacked into June. After that, going to work on teaching my dogs to surf better.

I’ve got a radio show takeover for The Crystal Method soon, and remixes for them as well, featuring the amazing Dia Frampton, LeAnn Rimes and Franky Perez. That drops March 17th. I also have some cool projects with Fort Knox Five, Lee Coombs, Justin Johnson, Markk Polo & Jen Zubal in the pipe.

Mid year I have a release called the Backbone EP coming on the Stanton Warriors Punks Label and I’m putting a lot of energy into a highly collaborative “It’s Wes Smith Yo” remix album.

Did I just write all that, really…c’mon this is crazy man…but another exciting project is working on a soundtrack for a PS4 racing game due in 2016. Maybe star wars or mad max directors will come knocking soon;) FTW, Surfs Up Baby!