With this new feature, artists can see important info like where fans are based with location insights, real-time streaming data, which fans are engaging with them the most, and the ability to keep track of the Amazon Music playlists and stations where their music is featured. — Not only that, the data available goes back to 2018 and refreshes on the app every couple of hours. 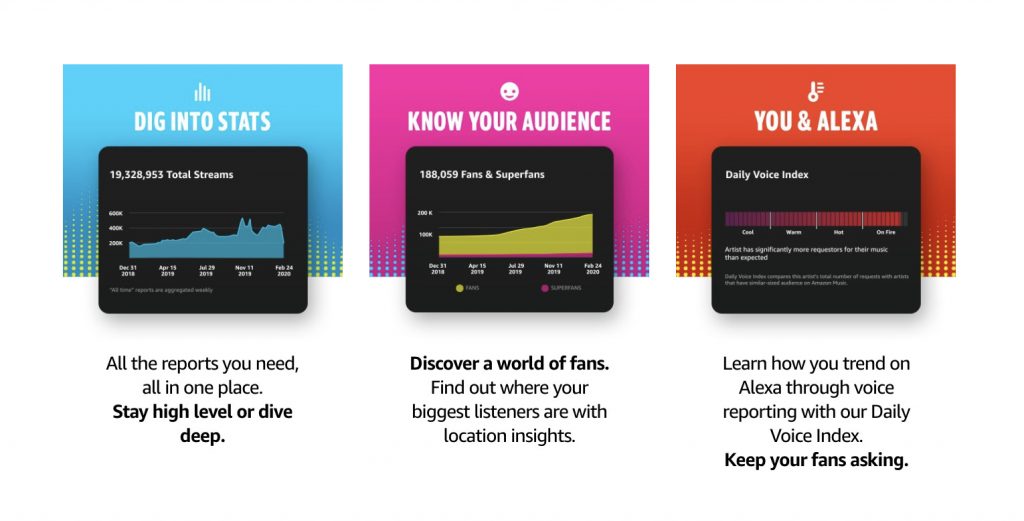 The main difference between platforms like Spotify for Artists and this new feature is the addition of voice technology data. Because voice has become one of the main driving forces for music discovery, this feature is a great way to dive even deeper with your promotional efforts.

During a panel at last year’s Nashville’s Music Biz conference, Amazon Music’s director mentioned that “Alexa, play…” is the second most popular command for the device behind “Alexa, set a timer.” Fans can also set a song to play as their morning alarm or ask Alexa to follow an artist on Amazon Music to get notified about new music as soon as it’s released.

New to the world of voice technology?

“How to Start Developing a Voice Strategy for Your Music”

The app is available to download now for iOS and Android.

To learn more about Amazon Music for Artists, visit their homepage to discover everything this new feature has to offer and how to get started.

Industry News
Partner Tools
Company News
Social Media
Registration is disabled.
We use cookies to ensure that we give you the best experience on our website. If you continue to use this site we will assume that you are happy with it.Ok