The Art of Clearing A Sample: Deciding If It’s Worth It and How To Actually Do It

This post offers a great rundown of clearing a sample and everything that comes with it. Written by Karl Fowlkes, an Entertainment Attorney, Music Industry and Hip Hop Professor, we’d like to share this info in the hopes of it helping our audience as well. (Thanks, Karl!) Let’s dive in…

The Art of Clearing A Sample: Deciding If It’s Worth It and How To Actually Do It

Hip Hop and samples go hand in hand, for better or for worse. We’ve seen samples become the core element in some of the greatest records ever. We have also seen samples hinder the release of a record because the copyright owners refuse to offer clearance. That’s the paradox when deciding to use a sample.

It’s a cost/benefit analysis every time.

Is the upfront fee and publishing/royalties you’re giving up worth using the sample? If you are a producer using a sample on an instrumental, it’s also likely to affect your payout and publishing split. Regardless, always be transparent to the artists and labels involved if you have used a sample as litigation in copyright suits involving a sample could lead to years of battle and millions in expenses.

Sampling is rooted in understanding the copyright associated with music.

The composition copyright consists of the music and lyrics and the sound recording copyright is the performed and recorded version of the underlying music and lyrics. The best way to distinguish the two parts is separating what parties own what.

How to Prepare Your Music for Sync Licensing

Who owns the sound recording?

Who owns the composition?

This is a bit trickier. Likely several people own and/or control the rights to a song’s composition. Imagine a scenario where there are two producers and three songwriters. Hypothetically speaking, each producer and songwriter could have a different entity administering their copyright in the song.

Why is it crucial to understand who owns or controls what?

It’s crucial to know who owns and/or controls what because these parties are who you will need to contact to clear a sample. Recapping what was explained above, there are two different parts in a music copyright: the sound recording and the composition.

But how does this play into clearing a sample? Well, to rightfully clear a sample you need 100% authorization from the owners of the sound recording and the composition.
For certain songs, this is fairly simple. One person or band wrote a song, then created the music behind the song, and this same person or band is also the sole owner of the master and self administers the publishing.

You will be looking for one person in this scenario to work out a composition license and a master recording license. Because one party is involved you will likely be able to negotiate a smaller “all-in” price for the clearance fee.

The sad reality is most songs that you choose to sample aren’t of the solo type. Many hands were involved in crafting these records and the copyright breakdown reflects this. The good part is clearing the master (sound recording) usually involves one party. For example, let’s say you sampled, Toni Braxton — He Wasn’t Man Enough For Me.

The first line of business is looking for the label that released the song because quite frankly nobody in that era owned their masters. A quick Wikipedia search shows LaFace Records as the label who released the song. Now, a quick history lesson is needed if you don’t know the impact of LaFace records.

A quick google search shows that LaFace’s parent company is Sony Music. The next step would be to contact Sony’s clearance department and come to terms on a master recording license. Once terms are agreed to on that side, you are halfway there.

The next step is figuring out who controls the publishing for “He Wasn’t Man Enough For Me”. A quick google search shows the following:

The easiest way to find out who to contact on behalf of the writers is to check the two largest Performing Rights Organizations in the United States, BMI and ASCAP.

A quick search of ASCAP’s repertory yields the following results:

This search happens to be fruitful identifying ASCAP’s 28% share of the song. Also, the search reinforces all of the appropriate songwriters and producers listed on the track (Rodney Jerkins is professionally known as “Darkchild” on the production side).

We do the same search over at BMI and their repertory yields the following results: 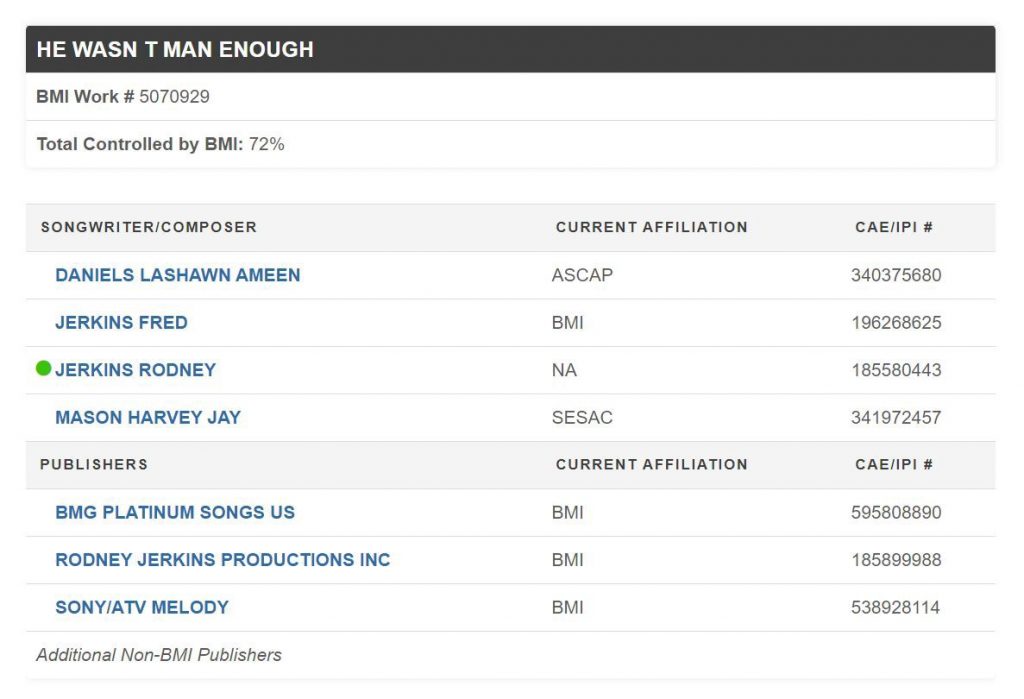 BMI appears to control the other 72%.

The next step would be to contact all of the publishers to agree to terms including a clearance fee and normally a piece of the publishing for the new work. Dealing with BMG, Sony/ATV and Universal in this scenario makes this clearance process a bit easier than normal. Sometimes a songwriter or producer is not up to date with their publishing and might not even be registered for a PRO and isn’t around to contact. These situations can get very tricky if songs are not registered correctly or a songwriter/producer is self-published and is missing or unfortunately deceased.

On the master side the clearance fee will likely range somewhere between $2,000 to $10,000. Additionally, the owner of the master will likely require some sort of split on the new master in the 3% to 10% royalty range. Remember, if you have less money to offer be flexible in regards to giving up a share of the royalty. These terms are freely negotiable.

On the publishing side the clearance fee should be negotiated “all-in” meaning whatever fund you have for that side is distributed pro-rata to all the owners of the composition. The fee will again likely range somewhere between $2,000 to $10,000. Most composition rights holders will agree to this scenario but I have seen crazier things. When clearing the publishing side you will also more than likely have to give up a share of publishing to the composition’s rights holders. The publishing royalty in the new work should be no more than 50% all-in distributed pro-rata. Again, if you have less money for the clearance fee you might be inclined to offer more publishing as a compromise.

Types of Publishing Deals and How They Work

The art of sampling is a music past time especially in the hip hop genre but the key is to try to clear a song’s sample before it takes off. There are countless horror stories where artist’s have sampled a song but didn’t get the proper clearance and by the time the rightful copyright holders became aware of the sample, it was too late.

In 2012, Baauer dropped the EDM smash “Harlem Shake” (the name was outta pocket to begin with). Huge record nonetheless, remember? The multi-platinum song peaked at Number #1 on the Billboard Hot 100 in the US, NZ, Australia and Brazil.

Problem is….the song contained unlicensed samples from Plastic Little and reggaeton artist Hector Delgado. Baauer told Daily Beast that he found the recording of Delgado online “the dude at the beginning I got off the Internet, I don’t even know where.” — MTV News

Pitchfork: “Have you made a lot of money from it?”

Baauer: “I still don’t know. I haven’t seen any money from it”

Before that one, Lord Tariq and Peter Gunz sampled Steely Dan’s “Black Cow” for their huge hit Deja Vu (Uptown Baby) in 1997. In exchange for clearing the sample, Steely Dan requested an advance payment of $115,000 as well as 100% of publishing royalties! (HA)

In both cases, the sample was probably worth it because it created touring and merchandise opportunities as well as the notoriety associated with the smash hit but man I’m not sure any sample is worth 100% of publishing.

Remember, samples are a new revenue stream for the original artists, songwriters and producers too, so it is not as if they don’t benefit. It’s usually in everyone’s benefit to work things out.

Remember These Keys To Clearing A Sample:

Want to learn more? To expand your mind, check out some of Karl’s other great articles here.